Swadhinata Sangsad, a non-political and social organization inspired by the spirit of our liberation war arranged a discussion meeting at 4pm on January 27, 2017 at the Professor Akhter Imam Auditorium located in Segunbagicha, Dhaka in an attempt to celebrate the 106th birth anniversary of former Chief Justice Syed Mahoob Murshed and to dole out ‘Justice Syed Mahoob Murshed Memorial Awards-2017’ in his honor to recognize the contribution of individuals who distinctively played a pivotal role in various sectors for the collective development of the country. Noteworthy to state that Syed Mahoob Murshed was the first Muslim Chief Justice of this subcontinent and is considered as a prominent thinker, patron to instate rule of law and spearhead of human rights movement in Bangladesh. The chief guest of the ceremony was honorable Justice Md. Nijamul Haque Nasim, Appellate Division of the Supreme Court, Bangladesh whilst honourable Justice Salma Masud Choudhury, Bangladesh Supreme Court and Pirjada Shohidul Harun, Additional Secretary of Ministry of Finance were present as special guests. The meeting was presided over by the former secretary of Government of Bangladesh and advisor of Swadhinata Sangsad, Mr Syed Margub Murshed who is also the talented son of late Chief Justice Syed Mahoob Murshed. Invited intellectuals from different spheres of the society, civil society members and other eminent personages actively took part in the discussion of reminiscence about the working life and philanthropy of Justice Syed Mahoob Murshed with great honor and encouraged all to follow his footsteps. 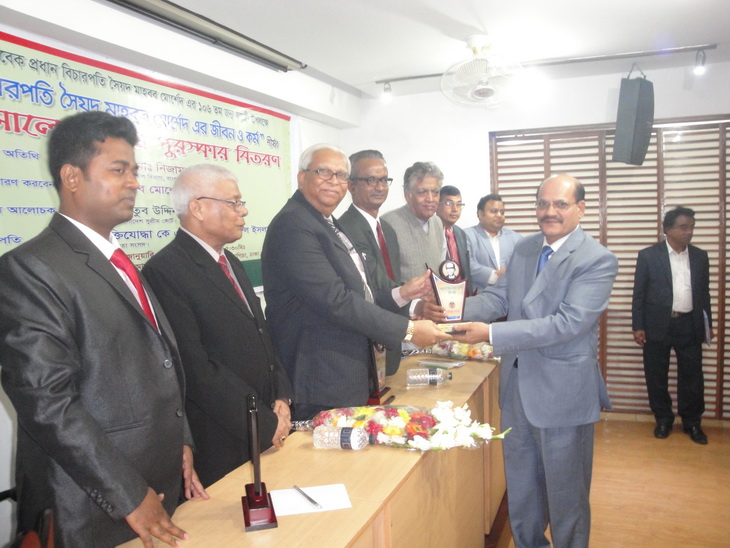 At the end of the event, Justice Syed Mahoob Murshed Memorial Medallions were awarded to selected high flyers. This year, Mr AZM Sakhawat Hossain, Managing Director of Social Development Foundation (SDF) was nominated by the executive committee and panel of advisors of Swadhinata Sangsad to receive the medallion in the category of Social Development Sector for his epoch-making contribution over time and was awarded with rapturous applause from the audience. Notably, Swadhinata Sangsad, since its inception back in 1991, has been engaged to inspire the new generations with the ethos of independence and alongside contributing involuntarily to the society for shared prosperity.